Ohio’s Public University Presidents stand united in opposition to the Trump Administration’s announcement regarding the termination of the Deferred Action for Childhood Arrivals (DACA) program.

Many Ohio students will face great difficulty because of the termination of the DACA program.  Taking action to rescind this program, even with a reported six-month delay, will throw the lives of hundreds of young people and their families into turmoil.

On behalf of our students, and all who are potentially affected, The Inter-University Council of Ohio urgently requests Congress to approve legislation incorporating a permanent solution to this issue, a solution that includes permitting these students to maintain their current status in this country and at our institutions.  This position is consistent with U.S. Attorney General Session’s statement rescinding DACA, in which he said, “Congress should carefully and thoughtfully pursue the types of reforms that are right for the American people…..and advance an immigration policy that serves the national interest.”

Consideration and passage of legislation at the national level is a better opportunity and more thoughtful way to fix the problem for public university students in Ohio facing uncertainty over their immigration status.  It allows for a well-reasoned, comprehensive, and permanent result that provides hope and sends a clear and compelling message of support to our community.

DACA students on our campuses enrich the learning environment and bring extraordinary talent to our state.  They have provided leadership in numerous disciplines from education to science and technology, and are actively serving their local communities and economies.  These students have been raised and educated in the United States and have proven to be an important asset to our society.  They need our support.

We look forward to working closely with you, members of the United States Senate, and other policy makers who will stand up for and favor a fair policy treating these students with the respect that they have earned. 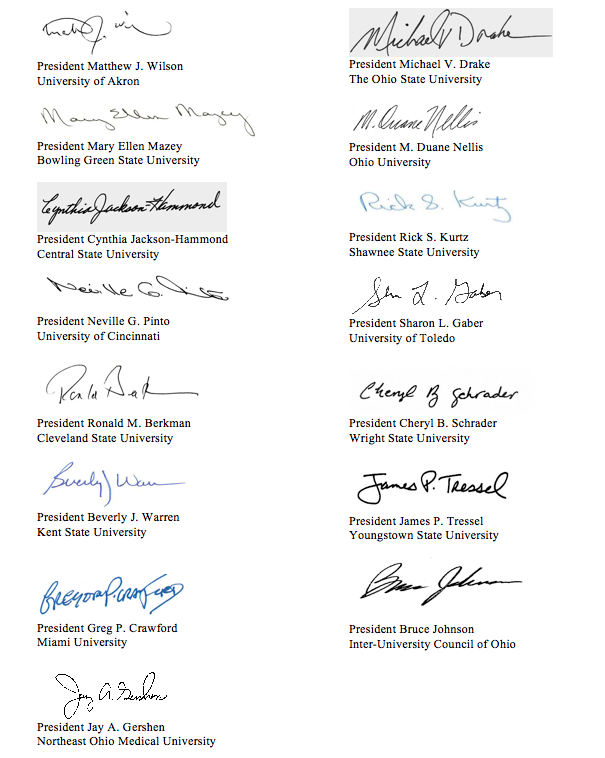