Tinnitus affects millions in the United States, and yet as of today, there is no treatment for this uncomfortable and disruptive hearing impairment. Northeast Ohio Medical University researcher Jianxin Bao, Ph.D., a professor in the Department of Anatomy and Neurobiology and a member of the Hearing Research focus area, has spent his 20-year career looking for a treatment. Now, as the Principal Investigator on a research proposal for Gateway Biotechnology, Inc., a company he co-founded, Dr. Bao has received a major boost from the federal government.

Gateway Biotechnology, Inc., has been awarded a Small Business Innovation Research Grant (SBIR) grant of $972,613 from the National Institute on Deafness and Other Communications Disorders (a division of the National Institutes of Health) for further research and development on tinnitus prevention and treatment. A second year of cost support, subject to the availability of funds and satisfactory progress of the project, was recommended in the amount of $1,207,345.

The project goal is to develop a drug to treat and prevent tinnitus.

“Millions of people in the United States live with tinnitus and noise-induced hearing loss every day, so I am pleased to see this federal investment in research and development that can improve the lives of so many people,” said Ohio Congressman Tim Ryan in a statement announcing the award. “This is a great example of government providing the necessary investments needed for finding lasting solutions for hearing-impaired individuals.”

Dr. Bao joined NEOMED almost seven years ago, with the goal of establishing a translational research program. His company, Gateway Biotechnology, Inc, has been a client of the Research, Entrepreneurship, Discovery and Innovation Zone (REDIZone®), NEOMED’s biotechnology business incubator, since 2015. Dr. Bao has partnered with co-investigators from both basic research and clinical fields to identify drug candidates for tinnitus. One drug candidate for preventing noise-induced hearing loss, funded by the U.S. Army, is now in a clinical phase II trial at sites in St. Louis, Missouri, and Akron, Ohio. 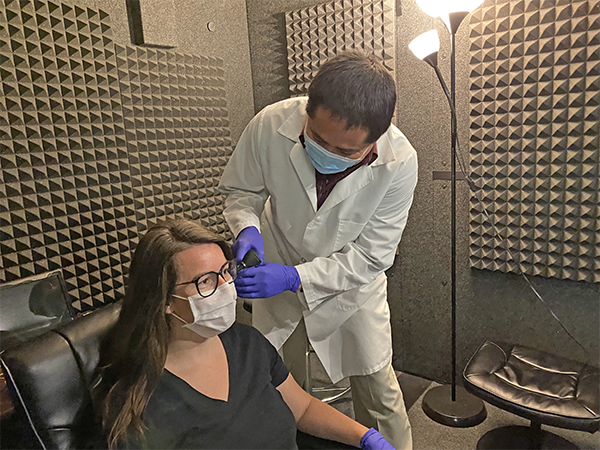 The National Institute for Occupational Safety and Health (NIOSH), a division of the Centers for Disease Control and Prevention (CDC), calls occupational hearing loss the most common work-related injury in the United States. An estimated $242 million is spent annually on worker’s compensation for hearing loss disability.

Dr. Bao cites military.com’s statistics that tinnitus is the number one disability among veterans, noting that it affects at least one in every 10 American adults. The noise of gunfire, machinery and aircraft are among the contributors, according to the website, which states that nearly 1.5 million veterans receive disability benefits for tinnitus.

In addition to his work as a researcher, Dr. Bao teaches neuroscience courses to students in the NEOMED College of Graduate Studies, including in the Biomedical Sciences graduate program, a partnership between NEOMED and Kent State University.