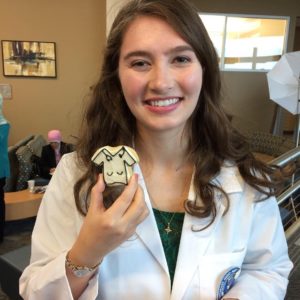 Can music help older people with their memories?

Northeast Ohio Medical University students have been able to make their own observations by visiting and interacting with patients at a long-term care facility called The Woodlands Health and Rehabilitation Center in Ravenna, Ohio.  As the community service chair of a NEOMED student organization called Musicians in Medicine, first-year College of Medicine student Elizabeth Otto (pictured at right) has performed with a small vocal ensemble of students for residents at The Woodlands.

Otto has wondered about the science behind music and memory but she saw some gratifying results for herself when the Musicians in Medicine group sang carols for residents at The Woodlands over the winter.

“After the concert had concluded, one of the older women called us over with a huge smile on her face. She told us she had been a singer all her life, and that it took everything in her not to harmonize along with us! It was incredible to see how much our little concert had brightened this woman’s day and brought back fond memories. It was extremely rewarding for me and my friends in Musicians in Medicine to use our talents to spread Christmas cheer in the center, because we could see how very much it was enjoyed by the residents,” writes Otto.

“Music travels across generations, linking old times with the new, allowing us to relate to the older generation in song. Music establishes a common culture that can be appreciated and enjoyed by both the younger and older generations. This creates a mentally stimulating community in which people of all ages can engage and relate to each other. And community, especially in a nursing home setting, can be vitally important to the overall wellbeing of a patient,” Otto concludes.

Power of the arts

“We have seen amazing positive effects of music for individuals with Alzheimer’s disease. It seems to awaken an inner connection to the individual and can also be an effective tool to reduce agitation and anxiety. Music can also touch a part of the brain that manages verbal skills, allowing a person to sing even after their ability to speak has been impaired,” says Kanetsky.

Barb Palmisano, interim director of the Office of Geriatrics at NEOMED, says that music and art therapies are well accepted in the field of geriatrics as methods to enrich the lives of older adults – especially for people with physical and cognitive impairments.

One especially innovative program, called Music and Memory, is endorsed by many organizations – including the Ohio Department on Aging – and used at hundreds of long-term care facilities across the country and internationally, says Palmisano. The Music and Memory program helps people in nursing homes and other care organizations who suffer from a wide range of cognitive and physical challenges to find renewed meaning and connection in their lives through the gift of personalized music.

Major research studies are underway to shed more light on the underlying neurological and behavioral mechanisms that are influenced by music, says Margaret Sanders, director of the Office of Palliative Care at NEOMED.

“Overall, the literature supports that music has a tremendous influence on our emotional and cognitive systems,” she says.

And student Elizabeth Otto is convinced: “As a future physician, the healing value of music was made apparent to me through my experience at The Woodlands.”