A NEOMED scientist who has explored the evolution of walking whales and much more in his nearly 30-year career at NEOMED has been named a Distinguished University Professor—just the second such professor in NEOMED’s nearly 50-year history.

President Langell announced at NEOMED’s Commencement May 6 that J.G.M. (“Hans”) Thewissen, Ph.D.,Ingalls-Brown Professor of Anatomy, was recently approved by the Board of Trustees for this designation. The title Distinguished University Professor is the highest rank that a professor can achieve. In being so honored, Dr. Thewissen joins John Chiang, Ph.D., Distinguished University Professor and a professor of biochemistry and molecular pathology in the Department of Integrative Medical Sciences.

Reacting to the news, Dr. Thewissen said, “It means to me that there’s a recognition at the University that our faculty members need to be well-rounded in teaching, research and service – but also that there’s a broad-minded interpretation of what those fields can be. Certainly, my research is different from straight-up NIH-funded research. There’s also recognition that all of these different kinds of research contribute to the rich fabric of academic life that a mature university should have.”

Meet the anatomy professor and researcher

Anatomy is a key aspect of Dr. Thewissen’s research into how organ systems work in whales and other mammals. His work extends into evolutionary topics, such as tracing the development of whales from animals living in water to walking on earth. 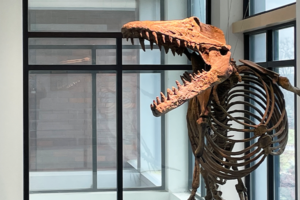 A replica of a discovery made by Dr. Thewissen in Pakistan hangs in a NEOMED atrium. It was the inspiration behind NEOMED’s mascot, known as Nate the Walking Whale.

Walk down the hall from Dr. Thewissen’s office to his lab, and you’ll find an eye-catching collection of three decade’s worth of skulls and bones of fossil and living animals carefully arranged and labeled in cabinets, drawers and wall displays. People of all ages benefit from Dr. Thewissen’s zoological collection of artifacts from his research in Alaska, Germany, Japan, India, Pakistan and elsewhere. 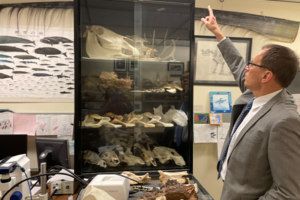 The professor might hold up two different skulls to teach a concept to anatomy students from the College of Medicine or Master of Foundations of Medicine program. Each year, high-school interns from Bio-Med Science Academy (located on NEOMED’s campus) take the opportunity to study with this internationally known scientist, who also draws post-doctoral fellows to work in his lab. 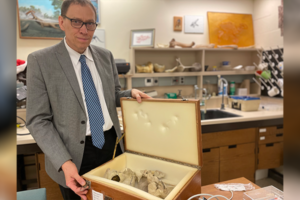 Dr. Thewissen extends access to the youngest visitors. “When a colleague says, ‘I have a kid who’s interested in fossils,’ I tell them, ‘Bring them in,’” says Dr. Thewissen.  “I think that it should be the goal of scientists to inspire young people, no matter what age, because society benefits if everyone is science-literate.” 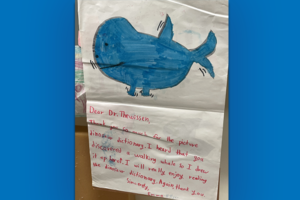 Dr. Thewissen’s research has been published in prestigious research journals such as Science, Nature, and the Proceedings of the National Academy of Sciences.  The scientist likes to reach out to NEOMED colleagues to collaborate, for instance, in studying retina function in beluga whales with College of Pharmacy colleagues Matthew Smith, Ph.D., and Samuel Crish, Ph.D. His work has also been written about in publications including National Geographic. Dr. Thewissen has edited four books and published a memoir titled The Walking Whales, which has been translated into Japanese and Korean.