X-ray on! Ready for pig! Belly band on! The scientists assembled in the lab call out their carefully orchestrated protocol and then intently observe an infant pig doing its mightiest to suck up some good gulps of milk.

Difficulty with swallowing often goes along with neurodegenerative diseases such as Alzheimer’s and Parkinson’s. It also affects premature babies. A group of NEOMED scientists is studying the mechanics of swallowing and looking for ways to improve the process.

Like scientists in NEOMED’s other five Research Focus Areas, those in Musculoskeletal Research often collaborate with scientists outside the region. The photos shown here capture a day when a group of researchers in the lab of Rebecca German, Ph.D., professor of anatomy and neurobiology and co-director of musculoskeletal biomechanics, was joined by Nicole Danos, Ph.D., a scientist visiting from San Diego, to advance their study of designing a bottle and nipple to emulate breastfeeding for babies. 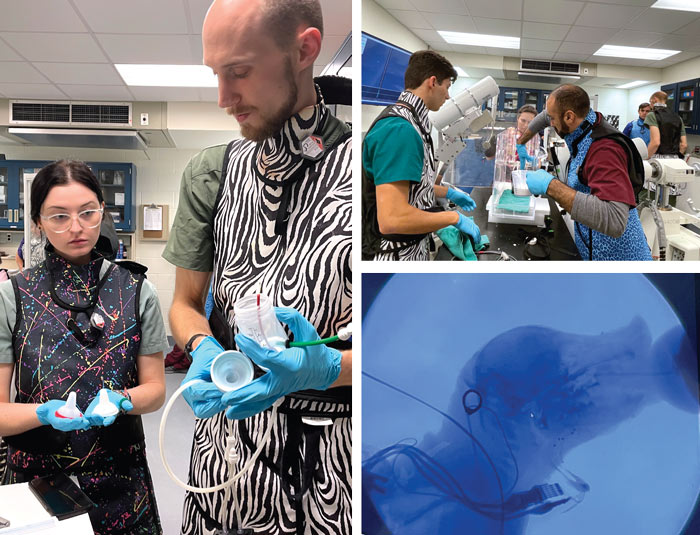 Back in 2018, Dr. Danos started visiting NEOMED from the University of San Diego, a private school in California, to work with Dr. German’s team — which includes Christopher Mayerl, Ph.D., as a key member, says Dr. German. Not long ago, Dr. Mayerl was the lead author of a paper published in the Proceedings of the Royal Society about how the muscles involved in feeding in infant mammals change through infancy. “Breastfeeding isn’t better just because of the nutrition it provides,” explains Dr. Mayerl. Nursing, including the suction process, is also important because it helps babies develop muscles in the mouth and teaches them to coordinate swallowing with breathing.

At Dr. Danos’ lab in San Diego, she developed ideas and sketches for an artificial nipple that would allow a pig to nurse more efficiently. Further developing his colleague’s ideas with what he learned about suction, Dr. Mayerl began building casts for a variety of slightly different nipples. Eventually, he narrowed down the choices to the prototype he developed that is now being used in the lab.

“Pre-term babies often aspirate (choke) when they are swallowing,” Dr. Mayerl explains. So do adults with conditions including neurodegeneration, in which aspiration often leads to pneumonia and sometimes death.

“My identity as a mother, a scientist and a teacher all come together today,” said Dr. Danos on the day of her visit. “As a woman in science, it’s very important to have role models like Dr. German and to see ourselves as subjects of scientific study, including as nursing mothers.”

Potentially, the nipple developed by Drs. Mayerl and Danos could be commercialized for humans. To get to that point, the research team has access to NEOMED’s legal expertise and help with intellectual property law, such as patents and copyrights. Tech transfer is part of the infrastructure provided by the University.

For now, this team is advancing understanding of a deceptively simple activity that is key to life.