Director of Development and Alumni Relations 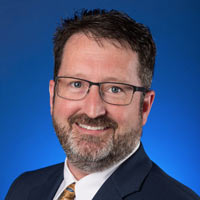 Craig Eynon serves as the director of development and alumni relations, responsible for raising funds for the annual Blue Fund campaign, overseeing alumni programming and supervising the development coordinator and data entry specialist. He joined NEOMED in October 2013 after eight years at Walsh University as director of annual giving and donor relations.

Before his time at Walsh, Eynon was employed as a financial aid counselor at Aultman College of Nursing. Prior to that, he was the assistant director of financial aid at Malone University. He started his professional career as an auditor for the State of Ohio after graduating from Walsh University in 1999, where he earned a bachelor’s degree in accounting. In 2005, he completed his master’s degree in higher education administration and student personnel from Kent State University.

Eynon resides in North Canton with his wife Tamie and their three children – Drew, Carys and Lydia.